In a revelation to me this morning, but not so much to Science, I realised my brain is, more or less, a gigantic filtration system. To demonstrate, I have borrowed this graphic that somebody else made and relabelled it for myself: 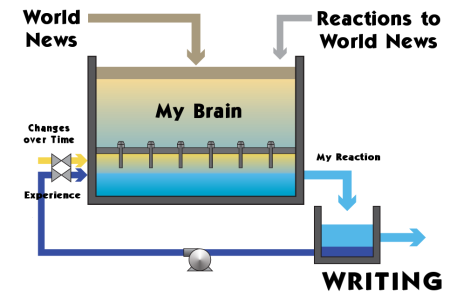 This means that I take in a ton of stuff from various sources (where news is a constant and the reactions can be derived from a large number of sources) and then react to it. The time stuff stays in my filtration unit is directly relateable to the complexity of the issue. Currently my brain is processing an issue for The Other Blog, and I’m finding a lot of stuff floating to the surface of my tank as a result. There’s the Cult of Personality, for instance: that bloke that lots of people seem to like who had his TV show pulled because he’s allegedly hit a producer. 350,000 people have signed a petition based, I would hope, on the full and detailed explanation of the circumstances behind his suspension to each and every one of them. Nah, didn’t think so. You see, thinking is dangerous. In this immediate world, it takes far too long. Also, if you’re thinking about it you can’t be a part of the spontaneity of Real Life.

That’s like reading, and we know NOBODY does that any more.

Thank you to @SingingPaladin for this 😀
Words are hard. That’s why people are more and more predisposed to go for the visual, to capitalise on the moment, because the attention span of the average person is now so short…
Aaaaaand you get the point.
That’s why I wonder why I bother, with a story written weekly that no more than a handful of people will ever read. Except, that doesn’t matter. It isn’t about making other people happy: if that happens, then its a fabulous, wonderful bonus, that will make me smile and do the baby fistpump. This is about MY HAPPINESS, and that pretty much crucially centres around the ability I have to become a better writer. I don’t frankly care if  most of the world would prefer me on a camera, or talking instead of typing. To become a better person a LOT of stuff needs to make it into the filtration tank and be dealt with. My means to do this is via these here letters and words, and as long as that remains the case the argument for blogging remains unerringly compelling. Seriously, I used a word last week in a podcast script and my Editor pronounces he’s confident he’s never seen this used by anybody else. That’s just WRONG.
Education, at some point, will involve everyone just sitting down and listening. There will inevitably be some reading involved too. Maybe, when these happen, instead of just tuning out, you could try paying attention.
You never know what you might learn if you do.

2 thoughts on “Feed Me Seymour”