The Boy in the Striped Pajamas

March 28, 2015April 17, 2016 Internet of Words
Yesterday, I tried to stay up late to catch the SPECTRE trailer launch but singuarly failed. However, that’s what the Internet is for.

Here you go, watch away:

One frame leapt out at me in watching this, and that’s part of the ‘personal effects’ Bond gets handed from Skyfall. Particularly relevant? This frame: 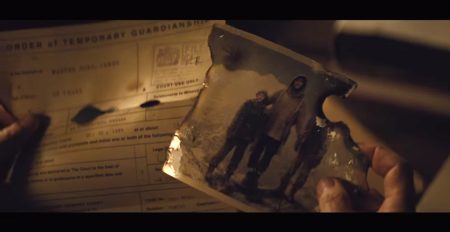 So here’s a Certificate of Temporary Guardianship with Bond’s name on it (and he’s 14 at the time) and that picture? I’d assumed that the head ‘missing’ was his mother, but I know it isn’t. That’s another boy.

Brain’s been doing somersaults over this since I saw it, and I suspect I’ll need a bit of time to digest all the possibilities. I’d like to postulate at this point the following:

I’m REALLY hoping this is what happens, because I’ve always wanted the number and name to simply be an identifier, and Skyfall was a MASSIVE disappointment in this regard.

Needless to say, Bloefeld and Bond are brothers. Because that’s just too perfect not to have happen 😀