Absolutely the best thing about creating a Novel is that it is your rules and nobody else’s. That means, in the last two days, I’ve completely rewritten history. As part of that, I’ve needed to design an icon that will appear all over my ‘World’, which is a visual representation of the organisation in which my main character (and pretty much everybody else I’ve written so far) exists. I’ve been working at this for several weeks, if truth be told, and now I think I’m there: 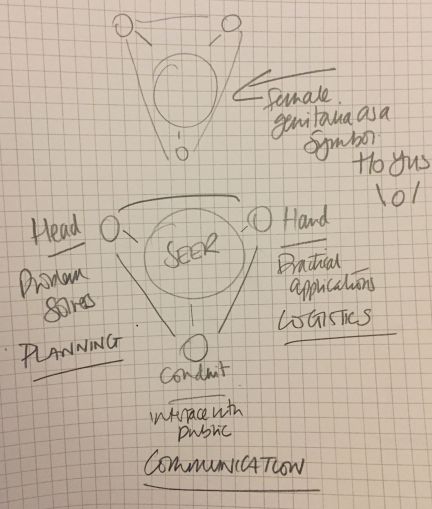 The fact it started as lady parts is really important: this is a female-driven hierarchy. It will be the symbol that appears on flags and standards, on the uniforms of the modern-day iteration of this ‘Regiment’and I can imagine it carved into the stone of ancient temples, castle walls and into the prow of ships. It will be a good luck charm, a ward to dispel evil spirits, and so much more. This is the moment where I wished I could draw better than I can, so I could come up with a modern graphical representation of this: I may give it a try as relaxation going forward.

The word count really isn’t going to be a problem. I’ve stopped for the night, mostly because I need to think through my next scene, and I’m far enough ahead now to not worry about where this is going, because I know my destination. That means I’ve been cheating a bit and going back over earlier dialogue, but it is utterly worthwhile. I’m in a place that I cannot get enough of and utterly love, and the story as a result is just telling itself. That’s the most amazing thing of all, and makes me smile whenever I think about it. I have a story that really works, and the ease at which it’s translating from head to screen is a testament, I think, to the hard work I’ve done in previous months honing my craft.

I am watching fully formed characters talk to me as if they've always existed in this world and it is beyond glorious. #NaNoWriMo2016

This process has made me realise that a lot of previous ideas that have never made the light of day (and at least one that did) have come together to produce this story. Mostly, I can see all the influences and derivatives here, I know what has swayed this story to where it now lies. This is a fascinating insight into process for me as a result.

It’s also the most fun I’ve had with a NaNo since I began participating.