I was thinking yesterday about how important Twitter has become to me as a means of communication, but not simply in real time. Any social media ‘expert’ will tell you that the key to using the platform correctly is engagement, and to do so effectively is not simply combining hashtags or imagery. More often than not it can start with the right conversation, especially in a period where the platform’s being used to communicate ideas and feeling in a manner that’s not happened before. Except for me, this has been the means that I’ve generated content for a couple of years, based on the understanding that the people I engage with are the most fertile source of ideas I’m ever likely to find.

This was again apparent yesterday when a conversation over Warcraft hardcore raiding with Sar evolved into what will be my article this week for MMO Games. All the building blocks were already in my head, but without this particular conversation taking place, I’d have lacked the leap in creativity that stuck everything together, and this as a writer is absolutely crucial as a means of fuelling the imagination. Of course, if this were fiction I was writing I’d probably want to do the opposite, and having the opportunity to ‘write’ in public could be full of potential pitfalls. I learnt this quite early on in my writing career from a man who did a brilliant job of balancing communication with a rabid fanbase whilst at the same time never compromising the integrity of his idea. 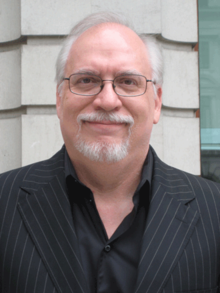 This is J. Michael Straczynski (who I’ve been lucky enough to meet) the writer responsible for Babylon 5, which for five years was the subject of a faily concentrated interest and obsession. Back then, JMS walked a fairly precarious tightrope, because if anyone could be seen publicly to suggest a story idea in a forum he (and I) read and that in any way, shape or form appeared in what he was producing? The consequences were too terrible to speak of. Of course, plagiarism is now a constant companion for many people, and with everybody nicking everybody else’s characters (often with a cheeky nod) without even a second thought, the world is a vastly different place. The fact remains however, you credit where due, whenever possible, and you absolutely remember the helpful people on your journey. Without this inspiration on a daily basis, I’d be pretty much nowhere, and it would be foolish not to acknowledge the significance of process going forward.

The temptation for many of us is to act in a ‘pack’ when a contentious issue appears: some might consider themselves as kangaroos as inspiration, but for others they’ll see only sheep. Social media has a habit of highlighting the dumb and stupid in all things because, like it or not, it is rare people take to the platform to praise. You only have to look at the fight between JK Rowling and Piers Morgan taking place at present to grasp that if you want to be genuinely pleasant to somebody, it’s a hell of a lot harder than simply opening both barrels and taking them down in flames. I will admit I genuinely dread the reactions of certain people I follow now because I know that instead of trying to find the good in anybody, it’ll be a pile of flame-filled abuse that they’ll respond with, because it’s just easier and less stressful to be negative if that’s all you get from engagement. I refuse to let these people get to me, and more importantly I won’t unfollow them, because there needs to be a reminder that your opinion is not the only one that matters. In fact, the overly emotional are as much of a frustration as those who don’t give a fuck.

Somewhere in the middle is where I’d now like to live.

Elysium’s a hard place to quantify in the virtual world. As the demands of social media make more and more people question their place within it, and whether they want to even participate in the process, there are some hard lessons to consider. Those of us who wish for more empathy will, undoubtedly find themselves in situations where it becomes apparent that it is our own indignation that’s the real issue. You can only blame others to a point: you place unrealistic barriers to entry or restrictions on your own life that can only be extended so far. It is understandable that a notion of control is craved, but eventually there’s going to come a point where the choice is simple: either agree with what you’re given or be quiet. Sure, we’d all love infinite choice, but in this world of 1’s and 0’s you can only do what the programming languages allow. That means, somewhere along the line, you will have to compromise.

For me this is picking one platform to concentrate on: not at the expense of others, but because ultimately I’m only capable of mastering one thing at a time. It means I’ll chase the robots away whenever possible, will defend the right for people to appear as unfeeling bastards because that’s their decision on their feed and grasp that in the modern world, if I want the best I can get, that does NOT mean blocking out everything I don’t agree with. It’s simple to be that person when you think your point of view is all that matters, and I know people on both sides of debates who are just as pig-headed and intractable as each other. The ultimate aim, at least for me, is to find a path that can be walked by everybody, not simply those who agree with my viewpoints. The way to do that isn’t to use Twitter as a soapbox but a meeting place, where the most unexpected of people might grant the salvation you so dearly seek.

As a writer, everybody has something to say I should listen to, at least once.