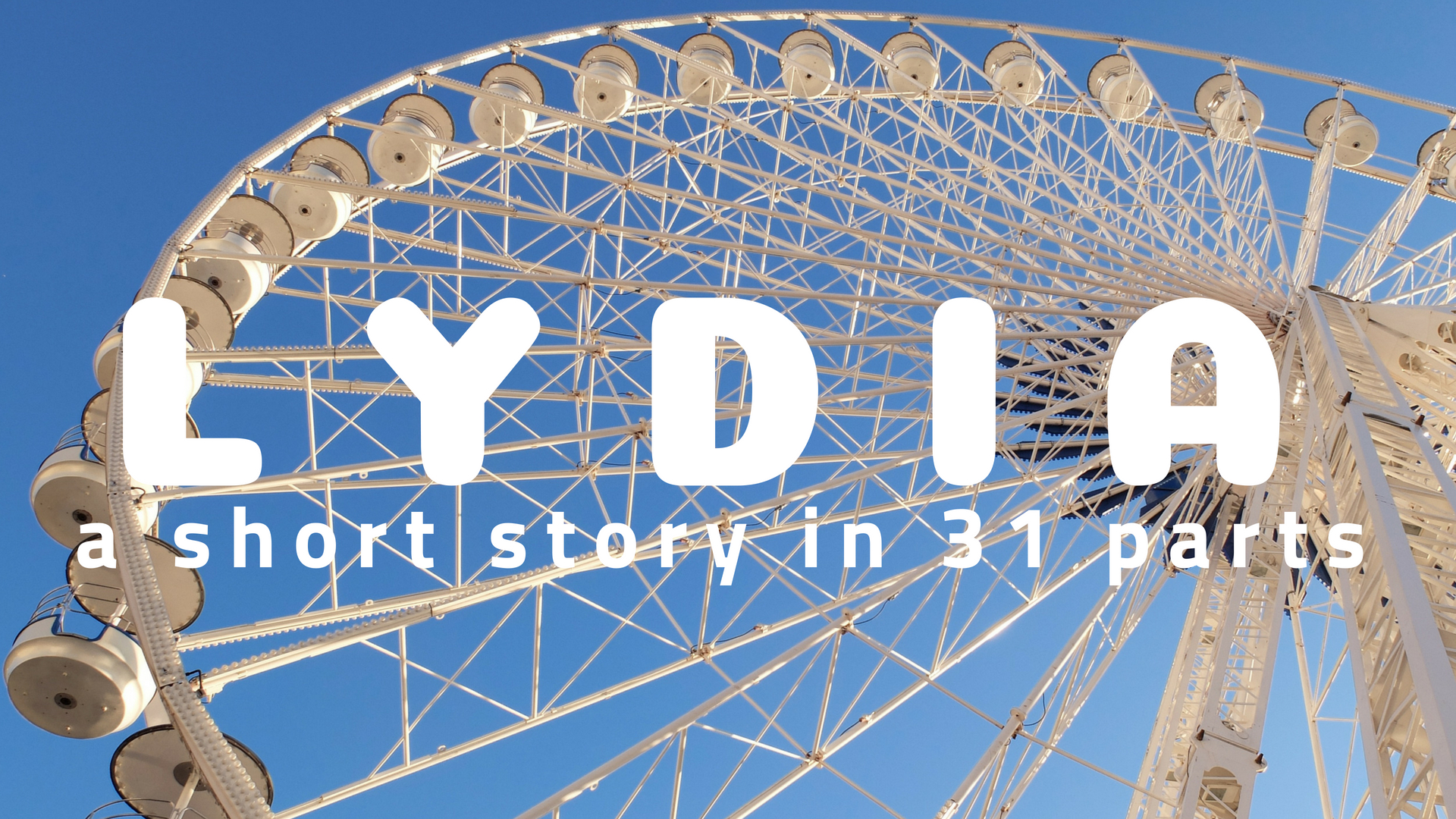 This story was first serialised in 31 daily parts via the @MoveablePress and @InternetofWords Twitter feeds at 9am and 4pm GMT respectively. It is now reproduced in a complete form, a number of small edits and corrections made to improve narrative flow and maintain correct continuity.

The Circus has never visited Anchorbridge before, of that Connie is certain. It’s not even on the map, battered corner store and gas station, collection of huts and tents that the railroad somehow forgot. Why they’re stopping here, now, is a mystery to all the carnies except one. Polari knows why they’re pitched, massive tent hauled to it’s full, imposing height. Sometimes, deviation is their plan because the Cards instruct change matters more than dollars. Connie watches from her caravan as he holds court: showman extraordinaire, Ringmaster of all.

This change transpired the night before, wagons pulled to sudden halt before crossing the tracks. Autumn’s coming: they’re already too far south as it is. To hit the State Line before October’s winds start causing trouble, this is a stop too far for everybody… yet, it’s show-time.

Connie’s neck and chin have been itching since early dawn, so she combs the coarse, red fibres of her beard as distraction. Body is humming, heat within like late summer sun, harsh and unrelenting. This flesh demands satisfaction, but no man here will touch her. She’ll survive. These muscles intimidate whilst breasts infuriate, which is the way it should be when you’re 100% woman except for the addition of excess facial hair. Gramma Ana had cried the day she’d upped and left, but understood why. Normal folks won’t accept a freak, just the way life works.

Except these folks do, and have. Sure, she’s lonely sometimes, but everyone here is too, in their own way. The relief is companionship, acceptance and understanding. The performance is everything, glue that sticks them together in one glorious, colourful whole… and she’s needed. The Bosco Brothers and the Amazing Almarzanoff can’t get the main tent support straight, it requires a woman’s brutal, muscular touch to complete. Beard grooming can wait, this is a part of the dance Connie secretly loves. Without her, they are less than whole, as it should be.

They’ll do three nights here and then it’s time to pack the wagons to head north for the Winter.

In the middle of her first Strongwoman act, Conni’s aware of being stared at. It shouldn’t be a problem, that’s part of performance, except this time… something is in the air. Tonight has been full of surprises: a lame horse galloping into the ring fully cured, before demanding to be part of the act she’d performed in for over a decade. The clowns’ buckets, normally filled with paper tonight held water: Beppo was not happy at his resultant soaking.

As the sold out, full to bursting tent cheers its acknowledgement of her ability to lift two adult sea lions precariously balanced on plinths, there’s a smile brighter than sunshine from the seats by the entrance. The woman’s tall and blonde, sporting beard the colour of straw. Connie has to stare hard, confirming the truth. Reed thin but still muscular in dungarees and a chequered shirt, this stranger exudes warmth and humour: more significantly, nobody around her seems at all phased by the fact she’s a bearded lady… quite the opposite is the case.

Scanning the crowd, this woman is not alone: there’s a voluptuous brunette in a blue summer dress, elegant goatee plus immaculate handlebar moustache. Twin mousy brown haired, middle aged ladies clap and smile, beards plaited and bowed to match the tailored scarlet trouser suits. The tent is at least a quarter full of beards, sported by both sexes, and nobody seems to be the least bit upset or phased. As the entire audience rises to a standing ovation, Connie’s heart accepts something that previously was unbelievable: she is no longer unique in the World.

There’s also a sudden, overriding desire to take a walk into town the following day: Anchorbridge is suddenly a fascinating place to be pitched at. The Circus’ only Bearded Lady’s already deciding which of many dresses to wear, and hoping she might bump into someone on the way…

The following morning is unusually sunny and warm for mid-September: Connie is having trouble containing excitement as she walks through the outskirts of the town, surprised at how many inhabitants there are living in shacks and tents, in the process of building better homes. Passing these groups, there’s no shortage of smiles or good mornings. Obviously overt single sex families mix with the traditional, one group that appear to be some kind of commune… with absolutely no sadness to be found. Everybody, without exception, appears relaxed and happy.

Her assumption had been there was some raw material being farmed here, or a resource exploited… but the truth is these people are outsiders, with nowhere else to go. Normal society had forced them into the wilderness, and together they were creating their own unique Community. Reaching what passes for Main Street, Connie’s heart soars: there is the woman with the sunshine smile, axe in hand, efficiently trimming a large trunk of its bark. Athleticism is without question, sight of her muscles working as blade strips tree becoming beyond distracting…

‘That’s Lydia,’ says a voice to her right. Turning, a young boy, not yet into his teens, is watching the woman work, as transfixed as she is. ‘My aunt can clear bark off a tree in ten minutes. She’s the best woodworker in town, have you come to learn how to make things too?’

The woman has stopped working, aware of Connie’s presence, and as their eyes meet attraction is both obvious and unavoidable. Lost for words, the Circus’ bearded lady is no longer outsider, or afraid of consequences of her desire. She has already been made better coming here.

This will be the first time Connie has missed a performance since her late teens: she knows Polari will not be angry. In fact, it was him who gave her leave to be here: ‘these truly are your people,’ he’d confirmed before encouraging her not to return for the day’s entertainment. Lying under canvas, Lydia is sleeping beneath crook of her arm. Talking here together, fully clothed, whisper of possibility slowly bound both together. There are two days before the Circus is due to ship out, handful of important choices to make before morning sun finally rises.

It would be so easy to once more drop everything, starting new existence with this family, in a loving community, already instant and accepting home, except… the Circus means more to her than was at first grasped. To leave them would also hurt: there are hard choices lying ahead. What is needed most are Elvira’s cards plus clairvoyant’s unswerving guidance: the distraction beside her must be removed, for now. A note is written, on back of a circus flyer: ‘There are issues that need to be settled, I will return with the dawn.’ before quietly slipping away.

It is a surprise to find a group of friends waiting for her at the City limits: all seven Bosco Brothers impeccably attired in matching suits, Beppo and Alto’s bright scarlet waistcoats acting as beacons in the gloom. Even Polari dressed for the occasion, a faultless ensemble. ‘I know what you seek, but there’s no need. Elvira has told me to follow your lead, that all who yearn must come see this community for themselves. She understands better than anyone what drives both bodies and minds forward. It is time for everyone to stop, think and breathe.’

The look Polari gives is damning, reasoning the Circus stopped here becoming clear: an overridingly female-heavy community, possibility to look past appearance and convention for genuine connection. What mattered most to her as attractive, is different for everybody, after all… As both Boscos plus clowns move as a throng towards town Polari remains, taking Connie’s hand with unexpected gentleness. There is a change to him: not inevitability of losing her to these people, but something far more significant. He is ready to give up existence for her ideal.

‘You have wrought much change since agreeing to stay and became part of our family: I will never be able to thank you for all the lessons these boys were taught, for that is all most of them have ever been. Respect matters, above all else, to build the best of men in this World. There is no point in moving back north, fate dictates this is our home for the winter, perhaps longer. Elvira knew we might lose you, but then grasped greater good that could come from us all taking a moment to stop and think, reassessing where it was that we all belonged.’

Connie will thank Elvira in the morning, no need now to return to the Circus. Anchorbridge has become a way-point, chance of growth for all her friends. What matters most to her is Lydia: cornflower blue eyes, hair the hue of ripened corn, bright bearded future possible together.