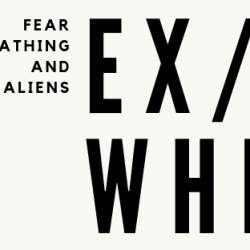 Here is a place where Chambers can be in his element.

It’s taken a while for brain and body to co-ordinate successfully, but this is good, up front and nominally in charge. This is the place in normal life where everything is most comfortable and confident too, even if there are moments when brain screams otherwise. What’s noticeably different from previous missions is a tacit belief that if he can’t cope or there’s a struggle, his partner’s beyond reproach.

Ami’s demonstrating an almost psychic ability to cover his shortfall, implicit belief that’s what will keep happening. However, they’re in undiscovered territory, and both have shown signs of mental stress. He needs to be ready to cover her at a moment’s notice, and instead of the responsibility rankling it’s all part of the excitement. If she falls, he’ll pick the woman up without a word, because that’s the job trained for right from the start.

Chris is fairly confident that had they’d met earlier, he’d not want to throw in the towel.

That resignation letter would have made it to the Deputy Director’s Inbox this morning.  Superiors had forced an increasingly unsuitable selection of partners into his orbit, which only served to strengthen a desire to work alone, when all that was really needed was someone who understood what he was and allowed that to happen.

It is as if he’s known this woman all his life, mostly as a result of their shared interests meshing: this could have been so much more than just a job. He might have begun to enjoy himself…

They’ve turned the corner, into the street where Hotel should be, but instead there’s a large, white space: this is a simulation, another inescapable reminder. In the centre of the whiteness is what looks like a giant Roman column, except it’s floating several inches off the ground. Ami’s at his shoulder, making no move to approach, and so Chris waits for reaction.

‘I was kinda hoping you’d provide me with the answer, ‘cause I’ve got nothing.’

‘I can’t be expected to do all the thinking here, that’s not exactly fair. However, I’ll provide a theory, and you can decide to agree or argue. Sound like a plan?’

‘This is the point where you were abducted -’

‘Can we find a better word for it otherwise this is cheesy Sci Fi and I don’t buy that.’

‘Okay, this is the point where you entered the simulation, so maybe they can’t reproduce it because that point needs to remain tied to the reality that is the actual Hotel -’

Ami’s hands go to her face, a second before he realises she’s crying. The temptation again would be to offer physical reassurance but that’s not what the woman needs, so he comes to stand in front of her instead.

‘I do know know what’s going on… I just… please, whatever you do, don’t step back.’